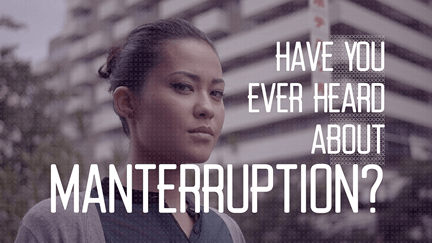 Have you ever
heard about Manterruption?

Share your voice. The first step to fight Manterruption is knowing it exists.

This is why we created Woman Interrupted
An app that detects Manterruption in daily conversations.

Journal of Language and Social Psychology

A recent study* found out that men interrupt women 23% more than they interrupt other men.

Female doctors are interrupted more than their male counterparts.

Men are 144% more likely to speak in law classes than women.

According to Brigham Young University and Princeton

Men will dominate 75% of the conversation during conference meetings.

According to the University of Columbia.

Female students are more likely to be interrupted when they speak or to have other students answer questions directed to them.

According to a experiment by Slate Magazine.

Women are in board rooms and lectures.

They are the heads
of MILLIONS of families.

But are they
actually being heard?

Manterruption is a behaviour when men interrupt women unnecessarily. It stops women from expressing themselves and have deep impact in their studies, carreer and personal lives.

This is why we created Woman Interrupted APP.
To show that it happens more than we think. AND IT NEEDS TO STOP. 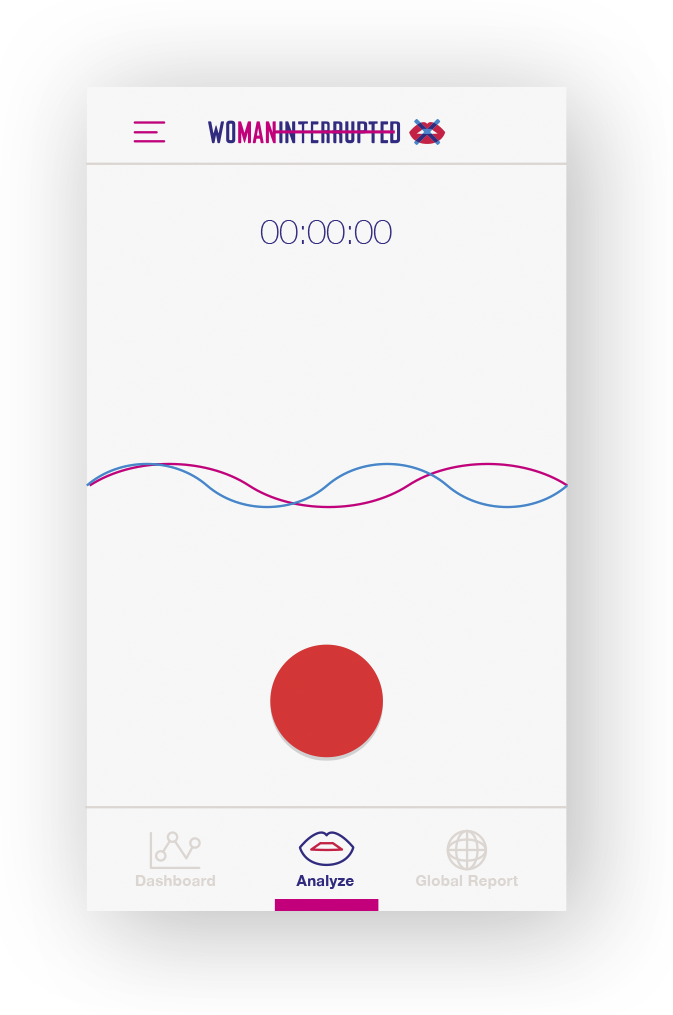 Woman interrupted
uses the microphone
on your phone to analyze
conversations.

Don’t worry.
No conversations are recorded
or stored: everything goes from
voice to data, automatically.

This is a beta version. We are working to
make the detection of interruptions even
more precise.

For more accurate results, place your
phone near the conversation. The app
works better in noise free enviroments. 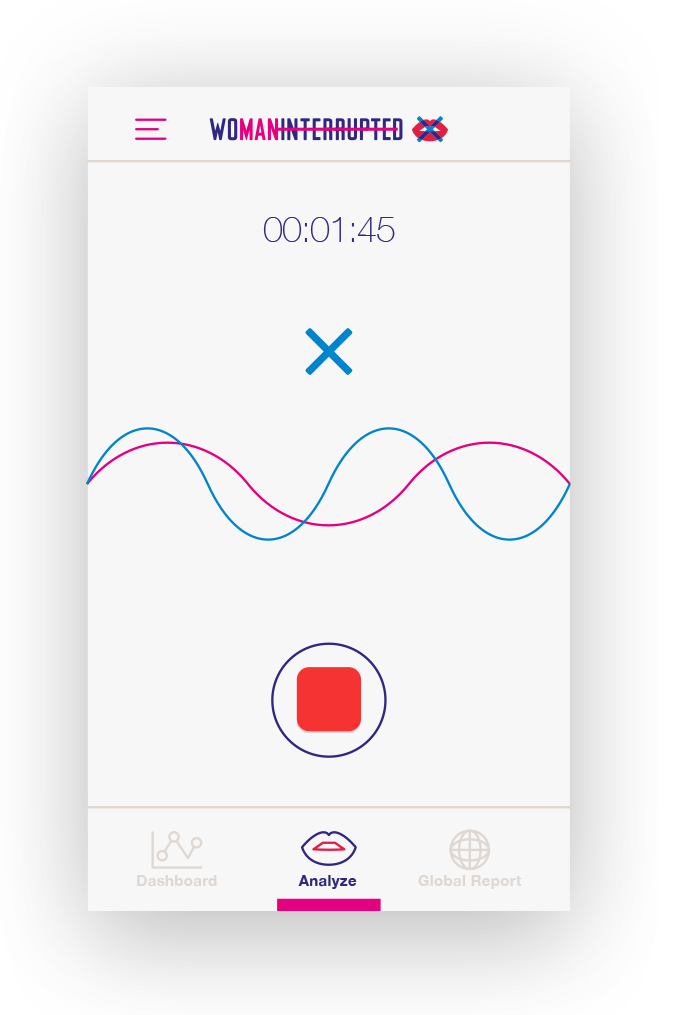 Female and male
voice frequencies,
together with the calibration
of your voice help us know
how many times you were
interrupted (if you’re a woman)
or you did the interrupting
(if you’re a man). 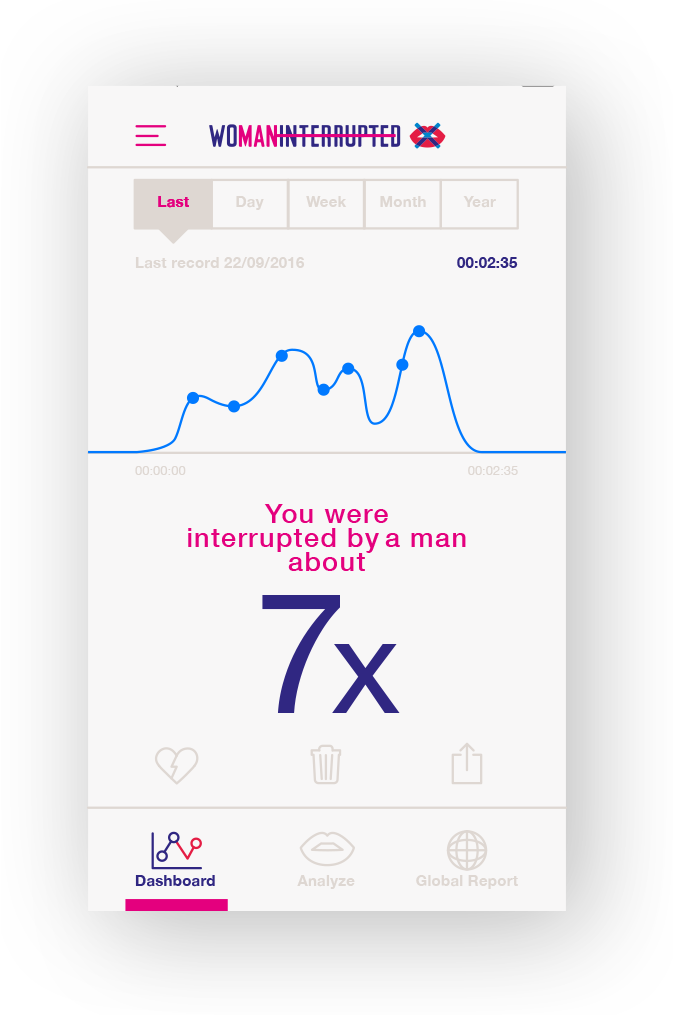 Besides of the numbers,
Woman Interrupted app
shows you a graph,
indicating in which points
of the conversaton
the interruptions ocurred. 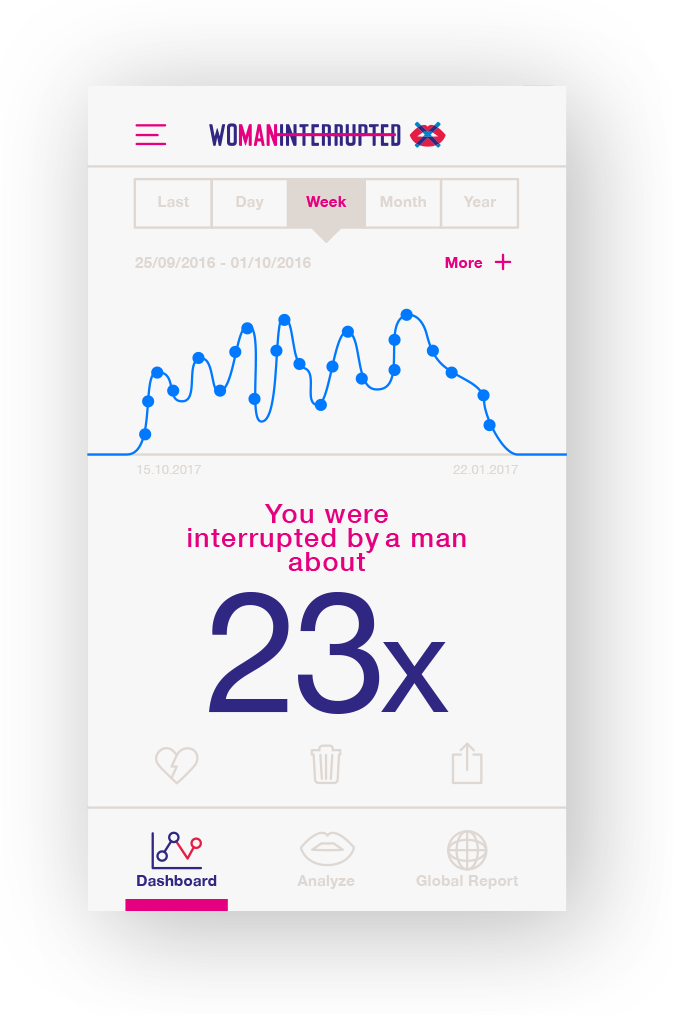 You can see the evolution
of your data on Woman
Interrupted app.
See how many times you were
interrupted in a day,
week, month, year - or simply
your last conversation. 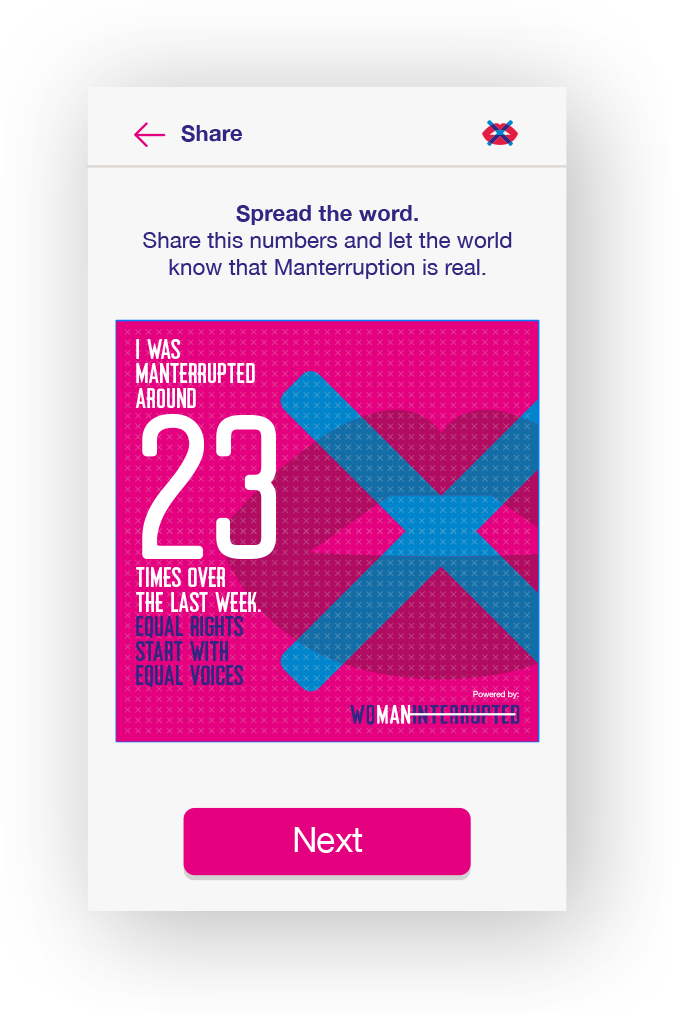 Together we can show
Manterruption is real
and more common
than people think.

YOU CAN ALSO PARTICIPATE

The best ones will be featured
in this gallery.

BACK TO THE THUMBNAILS

Different women. Different artists. One cause.
These Illustrators around the world, both male and female, donated their artwork to promote the fight against Manterruption.

In which places women
are being more interrupted
at what times?

We gathered data
from users around
the world to discover

In which places women
are being more interrupted
at what times?

We gathered data
from users around
the world to discover

Manterrupting is a subject worth talking about.
The project made headlines in following networks, newspapers and news sites around the world.

- Is there a cost to use the app? Will there ever be a cost?

Woman Interrupted is and always will be free, for both Android and iOS phones. It was created to help raise awareness about manterrupting in as many people as possible in order to help fight it.

- Can I use the app anonymously, without logging in through Facebook or providing my email address or name?

No. To use the app, you will need to register. Your information will help us collect statistics about manterrupting.

- Can I use the app anywhere in the world? Can I download it while I'm in one country and then use it in another?

Yes. The app is available for use everywhere and will soon be translated into more languages.

- Does the app detect interruptions during conversations in languages other than those into which it has been translated?

Yes. The language being spoken does not affect the voice analysis because it uses the frequency of male and female voices and voice calibrations to identify interruptions.

- Can a man use the app to count the number of times a woman interrupts him?

No. The app was designed specifically to identify and fight manterrupting. When the app is used by a man, it will count the number of times he interrupts women.

- My app isn't working properly. Where can I find support?

Please submit your error report using the "Feedback" option, or email it to: support@womaninterruptapp.com

- How does the app distinguish between male and female voices?

By analyzing the frequencies of the voices captured by the microphone, we are able to identify the gender of the person speaking. The precision of the app is further refined by additional data such as the pitch of the user's voice and the calibration of the app.

- How does the app identify an interruption?

First, the app identifies the gender of each participant over the course of a conversation. Then it detects voice pitch information to cross-reference with the genders that were identified. Then, the app analyzes the conversation frame by frame, tagging places where male and female voices overlap as possible interruptions, which it will then count.

- How does the app know the interruption was by a man?

When we analyze the voice frequencies frame by frame, we can spot places where a male voice overlaps a female one, as well as how the overlaps progress. If the overlap persists, we count it as one interruption by a man.

- If the person doing the interrupting is a woman, does it count toward the final result?

The app was developed to find patterns of men interrupting women. However, it is possible that an interruption by a woman can be counted if her voice is very low-pitched or the man's is very high-pitched. Please keep in mind that we are continuously working to improve the app's precision.

- Can the app gather information when it is not in use? Can it activate the microphone any time the phone is on?

No. The app starts working when you push the red button and stops processing data when the conversation ends and you push the same button again. It's possible that a future version of this app will automatically analyze conversations throughout the day if you authorize it to do so.

- Is there any chance someone could gain access to my recordings?

No. No conversations are recorded. The app analyzes audio in real time and converts conversations into data. Aside from the number of interruptions, nothing is stored on your device or on any servers.

- Can my recordings be stolen by someone with malicious intent?

- Are my conversations stored by the app and its owners? Where are the recordings kept?

No. No user conversations are recorded or saved on your device or on the Woman Interrupted servers.

- Will the Global Dashboard results show my name and the names of other users?

All of your personal information is kept confidential and none of it will be used. The Global Dashboard will display only the totals and cross-referenced data from different regions and will never identify specific users.

- Is it possible for me to share my results only with my friends and acquaintances?

- Can I keep my recordings stored on my phone?

It is impossible to store recordings because the app does not record conversations. It only analyzes audio in real time and saves the resulting statistics.

Woman Interrupted exists to show the world
how serious Manterrupting is.

How?
Showing that these interruptions are much more common than you think.

The app analyzes everyday conversations using the microphone on your phone to detect these kind of interruptions.

You can help by simply using the app.

All the statistics gathered from users around the world will be made available online, for everyone who wants to know more about the issue.